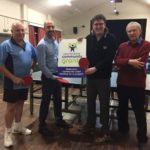 The club has recently acquired new tables, nets and surrounds following a successful bid to Braintree District Council for funding.  The funding came from the individual councillors’ fund and each of the three councillors representing Black Notley, Graham Butland, the leader of the council, Tom Cunningham and Frankie Ricci, contributed £500.

Councillors Cunningham and Ricci came along to the club to make a formal presentation and to see the club in action, as well as trying out the facilities for themselves. 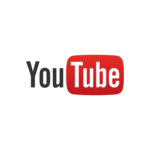 The club now has its own Youtube channel. (Click the logo) This will be updated on a regular basis so please check back often. 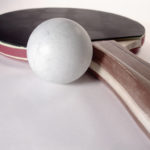 The club website has had a revamp. Feel free to send comments to webmaster@bncattc.co.uk

Once again Liberal A, champions for the last two years, lead the way at the mid-season break in the Braintree Table Tennis League.

But unlike last season, when they had opened up a 25-point gap at this stage, this time they are only just keeping their noses ahead of second-placed Rayne A.

The difference has not so much to do with their own performance, where they have as last year won every match, but is down to the more potent challenge from their rivals.

Last season the Rayne club’s four top-scoring players, Alan Burgess, Steve Pennell, Adam Buxton and Hector Rogers, were in three different teams.  This year they have been brought together to have a stab at the title. They have lost twice, 6-4 to both Liberal A and Netts A, but have otherwise strung together an impressive set of results and should keep the title race alive for some matches to come.

Black Notley B, second last season, have opened up a lead in division two but Rayne E have been strengthened by the return to action of former first division player Dean Andrews and will be out to make up ground in the second part of the season.

Second place is all the teams in division three have left to fight for as Felsted RBL C continue to march off into the distance.

They have conceded just nine sets in ten matches, a record rendered even more remarkable when one remembers that five of those came in their first match when they came up against an inspired Peter Taylor, who won his three singles and shared in a doubles win.  Since then it has been 9-1 and 10-0 all the way.

The fight to avoid relegation from division two of the Braintree Table Tennis League is turning into one of the tightest battles for many years with six of the 11 teams in the division separated by just ten points. The fate of the teams involved is complicated by the need to rebalance the divisions at the end of the season with two teams likely to go down rather than the usual one. All five matches in the most recent set of results involved teams caught up in the struggle.  They all lost, but some, inevitably, will be happier than others.

The two teams who fared best – Black Notley D and Netts E both lost 6-4 – have contrasting records.  Notley currently stand four points better off but have won only one and drawn one of their 11 matches, whereas Netts have won three and drawn two out of ten. Notley D had the good fortune earlier in the season to run across a Notley C team shorn of their two main point scorers Tim Huxtable and Glen Laing, but it is also the fact that they have run most of their opponents close that has kept their heads above water. Their latest reverse is their sixth 6-4 defeat of the season, including their last four matches.

Nomads got the better of them this time, thanks largely to an unbeaten evening by Kevin Saunders. Sean Clift had a good win over Richard Kemp, but all three Notley D players contributed, as has often been the case this season.

Netts E’s result also had a familiar ring to it.

Apart from one set gained by Graham Farmer in the opening match of the season, all Netts’ points have come from Fred Evans and Joe Meleschko, and they were at it again against Rayne F. Both won two sets and both came close to making it three.  Against Dave Marsh, Evans was two games to one up and Meleschko 2-0 up but Marsh got there in the end.

Netts D came off worst but they were playing a strong Notley B side of Gordon Fairchild, Steve Noble and Mick Richardson, so a 10-0 defeat was always on the cards.

Rayne G were facing an equally strong-looking Rayne E team, for whom Dean Andrews was unbeaten, but Steve Siggs’ two wins could yet prove vital.

Bottom team Notley C’s fortunes could be on the up if, as expected, Laing makes more appearances in the second half of the season.  In the meantime wins by Huxtable and Leon Hewitt over Dave Hardy gave them a useful two points against Liberal C.

The Felsted RBL C  juggernaut rolls on – and even Shirley Carroll, who is a cut above most in division three of the Braintree Table Tennis League, could do nothing about it. Apart from their opening fixture, when they ran into a top-form Peter Taylor, Felsted have won every match 9-1 or 10-0 and Rayne I were the latest team to fall into the latter bracket.

In her first appearance of the season, Carroll took Andy Laws to four games, lost to Dean Wood 11-5 in the fifth and stretched Nick Butler to 11-9 in the fifth. She came close to beating Butler after taking the first two games and reaching deuce in the third, but he just scraped home and, like Wood, still only has that defeat by Taylor against his name.

Rayne H climbed into second place, but not in a manner they would have wished.  They lost 7-3 to Black Notley F and moved just two points ahead of Notley E, who did not play and now have a match in hand. Declan Baines was unbeaten for Notley F.

Dave Whiting turned out for Rayne J for only the second time this season and his three sets helped them to an 8-2 win over Netts F.

Alan Billing was undefeated in Notley G’s 6-4 win over their own H team.

Leaders Notley B were in ruthless mood in division two, taking all ten from Rayne G, while chasing Liberal C, with only two players, were restricted to a 6-4 win over Rayne F’s team.

Gareth Davies took his three singles while Garry Fryatt just failed to follow suit after losing at 12-10 in the fifth against Dave Moles.

Ken Lewis made a rare appearance for Nomads, who beat Notley C 8-2, while Netts D scored only their second win of the season, 6-4 against Notley D, despite three defeats against Sean Clift.

In division one, any lingering hopes Netts A may have had of making a challenge for the title have surely disappeared after a surprise 6-4 defeat to their own C team.

With both Andy Holmes and John Cleasby in the side that was hardly a result they would have expected.  But Nikki Davison beat both of them, as well as reserve Steve Buer, and James Mullane joined in with a win over Holmes that must rank as one of the best of his career.

Notley A are making a determined effort to get away from danger.

After only one win in their first ten matches, they made it two wins in two matches – and it is no coincidence that Lucy Wang played in both.  She was joined by Victor Chan in winning three singles and the doubles in the 7-3 success over Liberal B.

Rayne D could also enjoy a modest celebration.  Their 6-4 defeat by Rayne C was their closest so far.  Unusually it was an undefeated Paul Lombardi, normally in the shadow of his teammates, who did the damage.

When Netts E lined up for their Braintree Table Tennis League handicap cup match against Black Notley F, they were carrying 95 years of inaction between them. All three players had retired from the game but have recently taken it up again after a prolonged absence.  Joe Meleschko took out his bat again last year after 25 years while Fred Evans made his comeback at the start of this season after 20 years..

But their absence was a mere blink of the eye compared with their new teammate.  The match marked Tony Smith’s return to the game after 50 years. And he found that his knack had not deserted him as he took his three singles. There was to be no happy ending, however, as Notley took five of the other six to move into the next round.

It was one of no fewer than six matches that was decided at 5-4, a tribute to the accuracy of the handicap system.

Black Notley teams were on the right end of two more of those, the G team beating Rayne G and the C team beating their own B team. Max King was unbeaten for the G team while Dave Parker won his three singles in vain for the B team.

Notley’s H team will not be joining their clubmates in the next round after a tight match with Liberal B in which they twice lost at deuce in the third game.  Robin Armstrong won both of those and took his other set at 12-21, 25-23, 21-17 to help his side through.

Netts F suffered a similar fate to their E team when Felsted RBL A came back from 3-1 down to clinch victory in the final set, Haydn Upson’s second win of the night to go alongside Richard Baxter’s three.

Rayne E were the other team to record a 5-4 win, in their case against their own A team. Their victory was a complete turnaround.

At 4-0 down, the E team looked to be on their way out of the competition when in the next set Steve Pennell clawed back his 10-point handicap against Richard Whiteside to reach deuce in the third game.  But it was Whiteside who hung on to claim it at 23-21. They were nearly out again two sets later when Dean Andrews also found himself at 20-20 with Pennell, but he too pulled through – 25-23 in his case.

In the league division one, Dave Punt scored one of the wins of his career when he got the better of Peter Hayden in Rayne D’s 7-3 defeat by Liberal A. It was the first time Rayne D had scored more than two sets in an evening, but neither Rayne A nor Netts A were able to take advantage as both dropped four points.

Netts beat Rayne C, with Andy Holmes unbeaten, while Adrian Pitt took his three singles for Liberal B against Rayne A.

Netts B also had a 6-4 win against Notley A, for whom Lucy Wang was unbeaten, while Rayne B took all ten against Netts C.